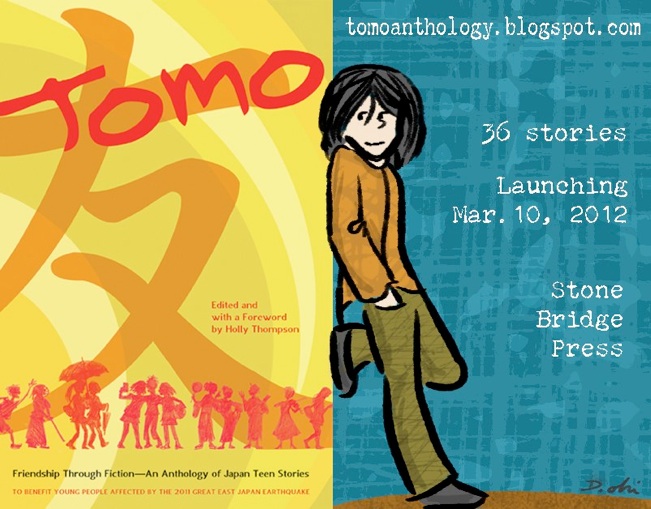 On March 11th, 2012, the anniversary of the Great East Japan Earthquake, Stone Bridge Press will be releasing Tomo: Friendship Through Fiction, an anthology whose proceeds go to help teenagers affected by the tsunami. All Tomo proceeds go to teenagers affected by the Great East Japan Earthquake. An excerpt from “Jet Black and the Ninja Wind” appears in this anthology.

Book description from Amazon: This aptly named fiction anthology — tomo means “friend” in Japanese — is a true labor of friendship to benefit teens in Japan whose lives were upended by the violent earthquake and tsunami of March 11, 2011. Authors from Japan and around the world have contributed works of fiction set in or related to Japan. Young adult English-language readers will be able to connect with their Japanese counterparts through stories of contemporary Japanese teens, ninja and yokai teens, folklore teens, mixed-heritage teens, and non-Japanese teens who call Japan home. Tales of friendship, mystery, love, ghosts, magic, science fiction, and history will propel readers to Japan past and present and to Japanese universes abroad. Click here for more information about the book (www.stonebridge.com). “A broadly appealing mix of the tragic and droll, comforting, disturbing, exotic and universal, with nary a clinker in the bunch.” — Kirkus Reviews

March 10, 2012, is publication day for Tomo: Friendship Through Fiction—An Anthology of Japan Teen Stories (Stone Bridge Press). One year after the 2011 Great East Japan Earthquake and Tsunami, this collection of short fiction brings teens worldwide closer to Japan and contributes to long-term relief efforts in Tohoku. Join us for this Tokyo Tomo launch event, which will feature readings by various Tomo authors, including editor Holly Thompson and author Leza Lowitz, reading from her novel about a female ninja, as well as panel discussion and reflection on this project.