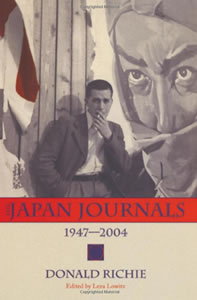 Donald Richie has been observing and writing about Japan from the moment he arrived on New Year’s Eve, 1946.

Detailing his life, his lovers, and his ideas on matters high and low, The Japan Journals is a record of both a nation and an evolving expatriate sensibility. As Japan modernizes and as the author ages, the tone grows elegiac, and The Japan Journals—now in paperback after the critically acclaimed hardcover edition—becomes a bittersweet chronicle of a complicated life well lived and captivatingly told.

Donald Richie, the eminent film historian, novelist, and essayist, lived in Tokyo until his passing in 2013.